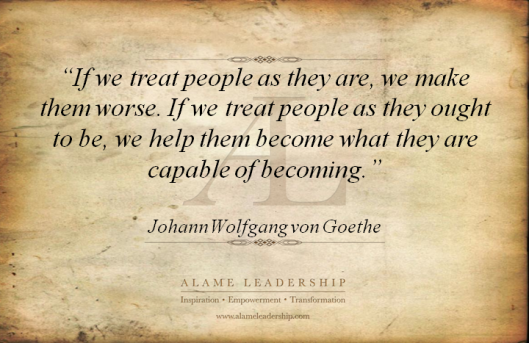 I heard this quote first time from Viktor Frankl in a video when he was presenting to a group of students at a university about the importance of meaning in people’s life. When he gave a metaphor illustrating that people must be seen as their best to become their best, the students laughed. Frankl replied that if they truly understood his points, they wouldn’t laugh. He continued saying that this is not his saying but it is what Goethe said. Amazing enough, I have came across this idea so many times in my readings. I remember Nathaniel Branden, a prominent psychologist and bestselling author, talked about something similar. He said that part of any therapy is seeing people as their best which will consequently make them recognize that they are so, that they have the seed of greatness even if everyone and everything around them is telling them the opposite. He gives the example of a woman who in the middle of the therapy sessions started to hate him so much and after exploration, he found out that it was because he was the only one who didn’t accept seeing her bad as everyone did. Years later, when they met again, she told him that this was they key reason that made her have greater life. Very inspiring and very true. If we look at people and see their weaknesses and deficiencies, we will end up treating them the way we see them and consequently have their behavior justify our view of them.

How would this apply in your own life?!